The distance from the nearest star to Earth is 150 million kilometres. As long seems to be the journey to another human being. 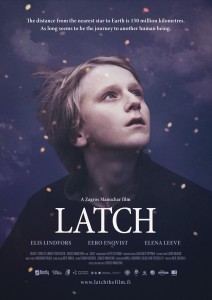 Latch is a story about a young boy with a speech disorder, his loneliness and his essential need to be loved and to be seen.

Henri (Elis Lindfors) suffers from severe stuttering and is transferred to homeschooling. He is going through a stage in his life that will greatly define his relation to the world. He tries to look for warmth and security, but the person closest to him, his father (Eero Enqvist), is not able to respond to his needs. As the situation becomes unbearable, even a frail connection to another person (Elena Leeve) can become significant.

The dreamlike, poetical film draws a portrait of a young boy, tentatively trying to grasp life. Silence, long takes and subtleness create a world into which the viewers are invited to.

Already before its Finnish premiere the film, written and directed by 23-year-old Zagros Manuchar, has been seen at many international film festivals, including one in the director’s native country, Iraq. It has also been short-listed for the 2013 international competition series at the Entrevues Belfort Film Festival in France. Latch is a timeless and hopeful portrayal of a world, in which person’s closeness to another is often only ostensible.